Krishnamurti called The Oak Grove a sacred place. The Oak Grove, the wooded area of approximately two acres within the fence to the west of Besant Road in Ojai, where Krishnamurti gave his public talks between 1922 and 1985, is an area dedicated to quiet meditation and retreat.

The Oak Grove is open to the public to those who have registered on-line. After registering on-line (see side-bar or bottom of this page) you will automatically receive the access code that opens the gate .

The Oak Grove will be maintained in as natural a state as possible without formal gardens, unseasonable watering of the oaks, or buildings of any kind. KFA will maintain the area with periodic reforesting projects and weed abatement.

Only Foundation sanctioned events will be held in the Oak Grove. It is not a site for picnics or events such as weddings or funerals.

From the book Knocking at the Open Door by Mark Lee:

“He [Krishnamurti, 1979] said, in effect, it was sacred land and needed protection from animals (horses and dogs) and should not be used by the school students as a playground. He then asked: ‘What can we do to protect this sacred place?’  Not waiting for an answer, he went on to say: ‘We should put up a fence around the grove as soon as possible, a fence that would last hundreds of years; a fence that could be seen through but wouldn’t allow dogs to wander there.’ He ruled out chain-link fencing and a stone wall, both very common in the Ojai Valley. We decided that it would be best if he could walk the land with us and together we could decide the parameters. We agreed to meet that afternoon at 4 p.m. in the grove and pace out the limits of the fence. I took a dozen rose stakes with orange ties and a hammer and met Krishnamurti and Theo Lilliefelt at the appointed time. 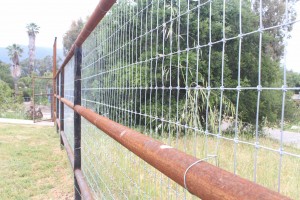 Krishnamurti began to stride around the perimeter of the grove in a most unusual fashion. He took long steps and darted among the trees. Some trees he pondered over and included them inside and others he purposefully passed as being outside. I hurried along with the stakes and saw no rhyme or reason for his selections. Clearly, twelve stakes were not enough so I was reduced to tying orange ribbons on the trees that were inside the fence limits. At the end, back near the cars parked on Besant Road, Krishanmurti asked how soon I could put up the fence. I didn’t want to sound negative but I had to tell him we had no money for erecting such a fence, which would be more than 1000 feet in length. He shrugged his shoulders and said: ‘Well, let’s raise the money as soon as we can.’ On that note, we left.”

This upcoming year, 40 years after Krishnamurti talked about this, we have completed the new fence to replace the temporary fence that was put down at the time.

The drought has ended in most of California but in Ventura County, of which Ojai is part of, the drought still persists. In 2014 our Arborist Mike Inaba, in the midst of the start of the drought wrote the following for the Foundation Focus:

“While some may find dying or dead trees unattractive or even alarming, they are an important part of oak woodland ecology. Their presence in The Grove should remind visitors that this is primarily a natural space, complete with natural risks to personal safety and pets. The Grove is a small representation of the surrounding woodlands, and the resilience of the oak trees has been encouraging.”

“In summary, we’re witnessing epic drought, despite the recent rains and cool weather. While the tree cover in The Grove has increased (along with the South Besant Slope woodland) for decades, a reduction in size and density of the tree cover is occurring now. But drought isn’t the only factor: we have increased pumping of well water and lowering of the ground water, not to mention natural oak tree predators such as bark and wood borer beetles. Of course, with stressed and infested trees, all types of disease, especially root rots, continue to affect older and damaged trees. But since 2007 we’ve seen how some trees will recover. We’ve lost many sick trees, but new and existing trees are taking their place in the canopy. Considering that environmental pressures are greater on this stand of trees than at any other time in their lifespan of The Grove, things are doing relatively well. We’re not in the clear yet, but there is reason to celebrate as we watch this woodland adapt to change.”